You are here: Home / Travel / Hotels / Escape to the New Forest – The Pig Hotel

A short train ride from London towards the Hampshire coast takes you to Brockenhurst in the middle of the New Forest. Nestled in the forest is The Pig Hotel, a 26 room country house hotel but they like to call it a restaurant with rooms.

The Restaurant at The Pig

The restaurant was very busy for a Wednesday afternoon. All the tables were full, some were hotel guests and some local diners. On an average day, they do about 100 covers, not too shabby for a destination restaurant. They have got so popular that they are planning to expand their beautiful conservatory dining room.

The bright dining room has colourful floor tiles, collected by the owners on their travels. It is decorated in the same shabby chic style that is repeated in the common areas and the rooms. In the warmer months, you can eat outside, next to their wood fire oven where they serve up home made pizzas.

On their 25 mile menu, all the produce is sourced from their own walled garden, livestock or producers from within 25 miles of the hotel. They also cure their own meats, make their own vodka infusions and experiment with lots of different plants and herbs.

The menu is a collaboration between the chef, the gardener and the forager. You can see how the evidence of this from the dishes on the menu. The restaurant at their other Pig Hotel Near Bath is run on the same locavore concept but with different suppliers and local producers.

On our visit there, we had some small bites in the cosy bar, while cocooned on comfy sofas in front of a wood fire. If you like piggy bites, you will love this selection. On the tray are some of their home cured ham, scotch eggs and crispy crackling. Their very tasty homemade chipolatas with Pear chutney and Saddleback Crackling & Apple Sauce deserve a special mention.

From “the literally picked this morning” section, the Alexander Cured Seabass with cucumber, lilliput capers & Dorset Creme Fraiche was a light precursor to the main. The creme fraiche dressing added just the bit of tartness the the firm seabass.

The Impressive Bath Chap, half a pigs head, teeth and all

The Pig’s “Extraordinary Bath Chap” is without doubt a show stopper. The presentation of half a pig’s head on a wooden board is just spectacular and a carnivore’s dream dish. To dig into this dish, surgically detach the crispy crackling from the meat and put aside. Dissect the meat beneath into bite size pieces, douse in the apple sauce and devour. Loved every mouthful of this but be warned, don’t order this if you are not hungry.

Our dining companions who ordered the Monkfish Tail & Fowey Mussels  with the intriguingly named fire stick chorizo declared it delicious and it was quite a sizeable portion. Loved the tobacco onions and the uncommon seasonal greens that came as sides.

To save us the indecision of ordering puddings, they served us a selection. On the board is a Kaffir Lime Burnt Cream, Forced English Rhubarb & custard Ice Cream, White Chocolate & Foraged Douglas Fir Mousse, Winter Savoury Cheesecake and the Pig’s Rhubarb Trifle. Some very clever and unusual combination of flavours. Delicious, very well executed and beautifully presented with a scattering of edible flowers from their greenhouse. With the mel we had a delicious bottle of Bacchus Fume 2010 white wine from British winery Furleigh Estate.

The people who live in the area are so lucky to have such a great restaurant serving interesting modern British food and wine. You can see the passion in the production, preparation and presentation of their food.

The Garden at The Pig

Each Pig Hotel has a walled garden, some poly tunnels and green houses which produces a lot of the fruit and vegetables for the restaurant. They grow a vast variety  of unusual ingredients like the Japanese Wineberry, Chocolate Mint, parcel (combination of parsley and celery), kaffir lime and many different kales. Quails and chickens are kept for their eggs and a few pigs are reared for the meat.

The Rooms at the Pig Hotel

After a meal here, you wish you had booked a room as nap would be in order. There are bedrooms in the main building and some in the converted stable block. The shabby chic and eccentric decor is prevalent throughout the hotel. In every room is a quirky collection of taxidermy, ancestral paintings and nick nacks that makes it look lived in and comfortable.

If you stay at the hotel, they encourage you to walk around the walled garden, forage in the forest, play tennis or have a spa treatment at the potting shed spa room.

The Potting Shed Spa at The Pig Hotel

The bedrooms are extremely popular with occupancy rates at over 90%. Room rates start from £150. The hotel is a favourite for weddings and sometimes corporate away days. There are lots of fun things to do around the area like fly fishing and foraging in the forest.

If you are anywhere near Brockenhurst or Southampton, it would be well worth the trip here for a great meal and a wander around. If you live in London, this makes a nice getaway that is not too far away, with lots of countryside to explore. The combination of affordable luxury and terrific local food, the perfect escape.

EatCookExplore was a guest of the Pig Hotel

✨🎄🍾🥂Wishing everyone a very Merry Chris 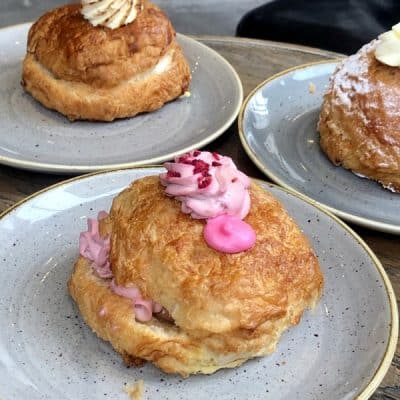